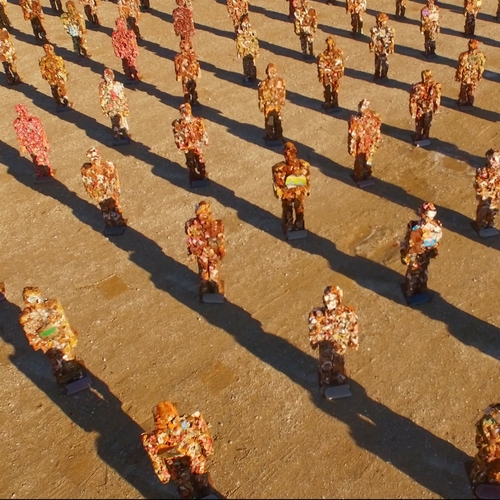 A poem for the planet, Nova Ami and Velcow Ripper’s film Metamorphosis takes the pulse of our Earth and bears witness to a moment of profound change: the loss of one world, and the birth of another.

Metamorphosis captures the true scale of the global environmental crisis. Forest fires consume communities, species vanish, and entire ecosystems collapse. Economic growth, tied to increased speed of resource extraction, has created a machine with the capacity to destroy all life.

But this crisis is also an opportunity for transformation.

Through a tidal flow of stunning images, Metamorphosis carves a path from the present to the future, and offers a bold new vision for humanity and the world.

In Milan, architects design vertical forests, urban towers covered with trees and bushes that reduce CO2, produce oxygen, and give new life to the city. In Phoenix, Arizona, swimming pools are repurposed into self-sustaining gardens, lush with plants and fish that generate food for people. In LA, installing solar panels in underserved neighbourhoods provides cleaner energy to families who normally would not be able to access it.

Woven through these and other stories of creativity and reinvention from artists, scientists, thinkers, and young children are creative, systemic solutions for our planet, and for our communities as well.

From the deep ecologic connection that humans share with each other, a radical form of hope emerges, vibrant and alive, like a chrysalis splitting open to reveal some new thing ready to take flight. Metamorphosis cinematically delves into how humanity is being transformed in new ways by the environmental crises we have created.

Nova Ami creates socially relevant, thought-provoking films that inspire, educate, and empower. Her work has screened at international festivals including Hot Docs and IDFA, and has been broadcast on BBC, CBC, CTV, Super Channel, Vision TV, and SBS Australia. She directed the documentaries Say I Do (CTV, Vision TV), Secrets (CBC’s The Passionate Eye), and Peacing it Together (Red Storm Productions), and was a producer on Occupy Love (Super Channel, Free Speech TV) and Army of One (BBC, CBC, SBS Australia). She was host, director, and writer on the technology and innovation television series The Leading Edge (Knowledge Network), and was host and segment producer of GVTV, a series about urban issues in Vancouver. She has a master’s degree in Media Studies from the New School.

Velcrow Ripper creates powerful, cinematic feature documentaries that deal with the central issues of our times. His epic “Fierce Light Trilogy” began with Scared Sacred, winner of the 2005 Genie Award for best feature documentary, continued with 2008’s award-winning Fierce Light and concluded with Occupy Love (2013). His first feature-length documentary, Bones of the Forest (1995, co-directed with Heather Frise) won nine awards, including Best of the Festival at Hot Docs and the 1996 Genie for best feature doc. He is well known for his award-winning sound design of such films as The Corporation (Best Sound, Leo Awards) and A Place Called Chiapas (Best Sound, Hot Docs, Leo Awards).

Metamorphosis is his sixth feature film.