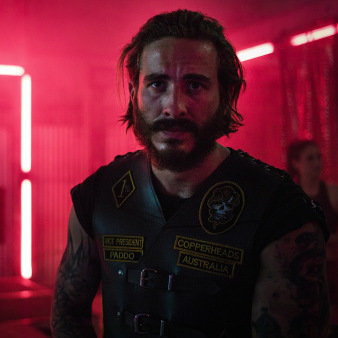 Stephen McCallum and Face2Face host David Peck talk about his new film 1%, violence, loyalty and the bonds of friendship, a sense of belonging, finding our way home and why people need story.

Stephen graduated from AFTRS in 2011 where he won the Foxtel Exceptional Talent award and the AFTRS EU scholarship. Since graduating Stephen has directed multiple award winning short films and commercials including his marriage equality advert for GetUp – It’s Time which was voted AdNews Viral of the year and has had over 16,000,000 hits on youtube.

In 2013 Stephen was the recipient of Screen Australia’s director’s attachment scheme for Tony Ayres’ Matchbox feature film. In 2014 he was Glendyn Ivin’s Director’s Assistant on Channel 9’s “Gallipoli” where he directed 2nd Unit. In 2016 Stephen was awarded the West Coast Visions fund to direct his first feature film 1%. Stephen has garnered a reputation for creating bold, character driven films set within visceral story worlds. He currently has multiple long form projects in development.

In the world of Outlaw Motorcycle Clubs, power belongs to those strong enough to hold it. Welcome to the dangerous, uncompromising and primal world of the Copperheads MC, welcome to the 1%. 1% follows Paddo [Ryan Corr], acting president of the Copperheads Outlaw Motorcycle Club. When Paddo’s simple minded brother Skink [Josh McConville] is kidnapped after a drug deal gone wrong, Paddo and his girlfriend Katrina [Abbey Lee] are forced to make a deal with rival club, the Devil’s, to save his brothers life.

All is well until Copperheads president Knuck [Matt Nable] is released from jail and returns to discover the Devil’s deal and other unwanted changes in his beloved club. Threatened and challenged to seize back control by his wife Hayley [Simone Kessell], Knuck violently terminates the deal with the Devils and puts Paddo back to square one. With Skink’s life on the line and no options left, Paddo has to choose between his president and his brother in the ultimate collision of loyalty and blood.