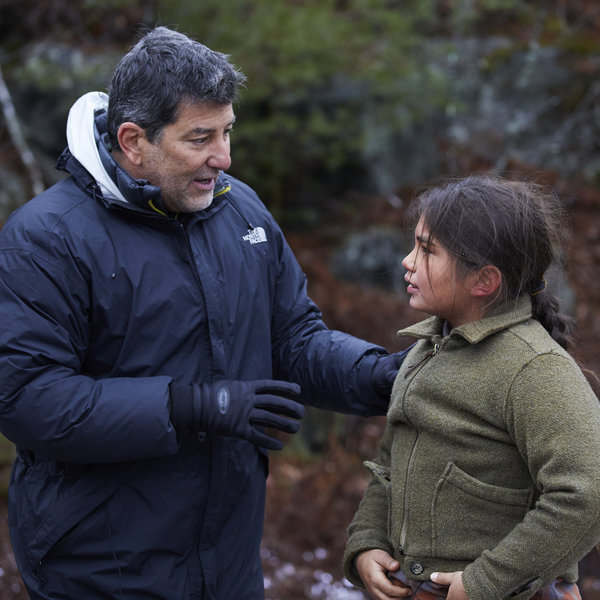 Stephen Campanelli and I talk about his new film Indian Horse based on the Richard Wagamese novel of the same name. We cover residential schools, honesty, bravery and authenticity, why words can be visual, and how stories were meant to heal.

Find out more info about the movie here.

In late 1950s Ontario, seven-year-old Saul Indian Horse is torn from his Ojibway family and committed to one of  Canada’s notorious Catholic residential schools. In this oppressive environment, Saul is denied the freedom to speak his language or embrace his indigenous heritage and he witnesses all kinds of abuse at the hands of the very people who were entrusted with his care. Despite this, Saul finds salvation in the unlikeliest of places and favourite Canadian pastimes — hockey.

Fascinated by the game, he secretly teaches himself how to not only play but develops a unique and rare skill. It’s as if he has eyes in the back of his head and can see the game in a way no other player can. His talent leads him away from the misery of the school to a Northern Ontario native league and eventually the pros. But the ghosts of Saul’s past will always haunt him. Forced to confront painful memories and revelations, Saul draws on the spirit of his ancestors and the understanding of his friends to gain the compassion he so sorely needs in order to begin healing.

Indian Horse is a survivors’ tale that foregrounds the indomitable spirit of North America’s indigenous peoples in the face of aggressive assimilation policies and racism. Saul Indian Horse’s story can be a tool to help foster further compassion and understanding, and in the process, become universal.

Stephen Campanelli, started his career as a steadicam operator, when it was quite a rarity in Canada, and quickly became the most sought-after operator in the country. He was the first to combine “A” Camera operating and steadicam, and in doing so unlocked an entirely new filmmaking perspective that quickly peaked the interests of some of Hollywood’s top directors including Stephen’s boyhood idol: Clint Eastwood. Stephen first joined Clint on the Oscar and Golden Globe nominated Bridges of Madison County and has remained Clint’s most trusted “camera eye” ever since.

They have collaborated on the Oscar winning films, Million Dollar Baby and Mystic River, the Oscar nominated Flags of our Fathers and Letters from Iwo Jima, and their successful films Gran Torino, Sully and American Sniper. They have just finished their latest, 21st collaboration,15:17 to Paris. Clint, and numerous other prominent directors, have entrusted Stephen with crucial on-set directorial decisions, and have relied on his expertise and guidance for many years now. After over 23 years by Clint’s side, Stephen jokingly confesses to being a graduate of the “University of Clint Eastwood”, having learned all of the maestro’s directing secrets.

Stephen is following in the footsteps of a great story-telling director, who has shared with him his vast knowledge, not only of directing, but of acting, and what it is like to be an actor before a daunting camera.

Now, with Clint’s blessing and the admiration of every cast and crew he has worked with, on the over 65 motion pictures listed in his resume, Stephen Campanelli has made the natural leap to the director’s chair, having helmed two motion pictures, Momentum (2015), starring Olga Kurylenko, James Purefoy and Morgan Freeman. He is proud and honoured to present to you, his latest feature film, Indian Horse.