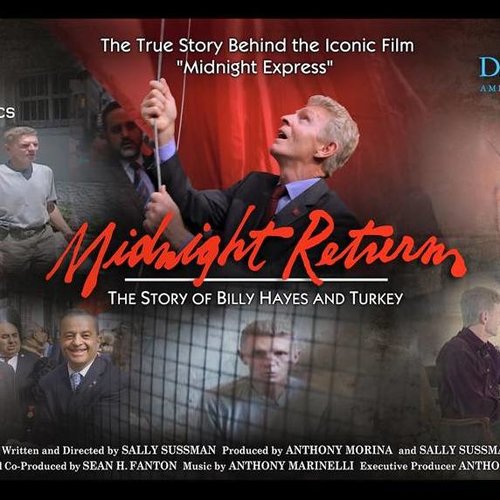 Sally and I talked about her new film Midnight Return, irony, racism, the power of story through film and why truth is indeed stranger than fiction.

After his ingenious escape from a Turkish prison in 1975, Billy Hayes arrived home to a hero’s welcome, instant celebrity and within a week had a book and movie deal for his story. From the moment it stunned the world at the Cannes Film Festival in 1978, ‘Midnight Express’ cemented its place in film history as an artistic and financial success, before becoming an indelible part of pop culture. But its lasting impact has been on Turkish people worldwide who still condemn the film as racist and blame Billy Hayes for defaming them and their country.  Despite warnings from family and friends, Billy returns to Turkey and faces a nation still haunted by the film and his own demons.

Sally Sussman Morina was born in Toronto, Canada. She attended the University of Southern California and received a Bachelor’s Degree in Broadcast Journalism. Less than two years after her graduation, Sally was hired as writer on the NBC series, “Facts of Life.” She wrote several episodes of that series while serving as a staff writer.

After leaving the sitcom business, Sally decided to pursue her lifelong passion for daytime soap operas where she was hired by William J. Bell, creator and head writer of “The Young and The Restless” as a story consultant and writer, two jobs she held for five years. During her years at Y&R, the series went from number six to number one in the Nielsen ratings, a position it has held ever since. Sally was responsible for many memorable storylines, including Dina’s return to the Abbott family, Jack and Jill’s affair, Katherine’s face lift and Lauren being stalked and ultimately, buried alive. During her tenure, she was nominated for two Emmy Awards.

In 1989 Sally was approached by Brandon Tartikoff, the President of NBC to create her own show and after submitting a bible for the series, “Generations” was born. “Generations” immediately earned accolades from the press for creating the first fully integrated daytime serial. The series launched the careers of Vivica A. Fox, Kristoff St. John and Kelly Rutherford and featured veteran performers like Richard Roundtree, Taurean Blacque, Joan Pringle and Robert Hooks. During its two year run, “Generations” received numerous awards and attention including being written into the Congressional Record. The series was sold all over the world where it still retains a huge following. After its cancellation by NBC, the series was picked up by BET which ran it again. The show may be gone but it is definitely not forgotten.

After “Generations” Sally returned to daytime again as the Head Writer of “Days of Our Lives”. During her tenure, she earned the show its first and only Writers Guild of America award for her storyline involving Sami’s execution. Along with that story, she penned the Kristen/Susan murder mystery and the Mike/Carrie love story. She was also nominated for two Emmy awards, won the People’s Choice and the TV Guide awards.

From “Days of Our Lives”, Sally went to work for MTV where she was Executive Producer and Head Writer of the network’s first evening serial called “Spyder Games”. The series ran for 65 episodes and she was nominated for another Emmy Award.

Currently, Sally has many active projects in development including a documentary entitled “Midnight Return” which chronicles the turbulent relationship between Billy Hayes, the real life character in “Midnight Express” and the republic of Turkey. Sally and her husband returned with Billy to Turkey in 2007 thirty years after Billy Hayes escaped from prison.

Sally lives with her husband, Anthony Morina who is currently the Supervising Producer of “The Young & The Restless” and their 16 year old son, Adam.

To learn more about her work visit her site here.