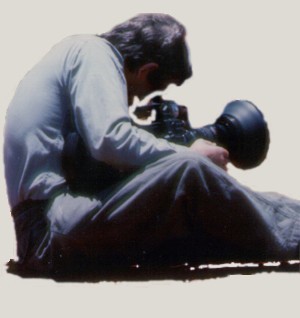 Peter talks about the ”dialectics of violence”, why cooperation will be essential to our survival as a human race, why he makes films for himself and how capitalism is a killer system.

Villon Films was founded by Peter Davis, who has written, produced, and directed more than seventy documentaries. His work has been shown on every major television network on the globe including CBC, CTV, BBC, CBS, NBC, Swedish Television, German Television, and NHK Japan.

Davis was born and raised in England. He completed his masters studies at Oxford University before emigrating to Sweden and then North America. His early career included positions as scriptwriter for the National Film Board of Canada; director-cameraman for BBC, CBC, Swedish TV, Danish TV, Australian Broadcasting, and WNET; as well as producer for Swedish TV, London’s Rediffusion Television, BBC, CBS, CBC, CTV, Polytel (West Germany), WNET, the United Nations, UNICEF, and C.A.R.E.

The Villon Films collection includes biographies of spies such as CIA agent and Watergate conspirator E. Howard Hunt and U2 Pilot Francis Gary Powers, and of the World War II Foreign Service officers who were accused of “losing China”; a satirical history of the American annexation of the Philippines; and a sociological history of the Jewish experience in the Catskills.

The Peter Davis Collection at Indiana University represents over 50 years of work. It includes not only films, but also corresponding outtakes, photographs, audiocassettes, and manuscripts, all available for research and study. The South African material spans the period of the most intensive struggle for human rights in that country, and also includes historical footage dating from the beginning of the century. Among the documentaries held there are Remember Mandela!, In Darkest Hollywood, White Laager and Generations of Resistance.

Both Peter Davis and Villon Films have won numerous awards, including:

Getting The Most From Your Garden, Red Ribbon, American Film Festival, 1981

Side by Side, Women against AIDS in Zimbabwe, Jury Award, WHO, 1995

For more information about Villion Films visit their site here.