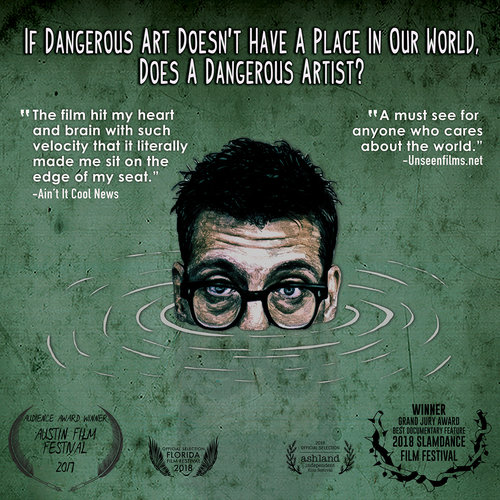 Pablo Bryant and Fish talk about their new film Cartooning from the Deep End, politics and power, personal responsibility, why life is precious and asking good questions and living in a sell out culture.

In this feature documentary we discover the dangerously funny cartoonist Mr. Fish, struggling to make a living in an industry that is dying out. In a world where consumerism is king, and opportunities are few, will this uncensored artist find a way to sell his art, or be forced to sell himself out?

Mr. Fish has been published in the LA weekly, Harpers, the Village Voice, The Nation and truthdig.com, as well as having his first book GO FISH published through Akashic press. F.X Feeney says, “He places you in the contradiction….He is a poet who’s operating with a cartoonists pen, and with a satirist’s goal of making you see further.”

This intimate documentary follows the artist as he struggles to stay true to his creativity in a world where biting satiric humour has an ever-diminishing commercial value.

Undeterred, Mr. Fish meets his plight head-on and with an abundance of creative energy. In the course of the film he curates a show and produces a book on the history of the art form, develops an animation series, and stages a gallery show of new original fine art. But the demands of raising a family overtake his freelance opportunities, and Mr. Fish is forced to make devastating choices. Ultimately CARTOONING FROM THE DEEP END is about the kinds of compromises a radical artist makes (or refuses to make) while trying to live in a traditional society.

Pablo Bryant has been the Director of Photography on four feature documentaries and has shot additional photography on many other projects, including HBO’s Cinema Verite’ , and the documentary The Vanishing of the Bees, narrated by Ellen Page. He filmed in India and Nepal for the National Film Board of Canada’s Tulku, which aired on CBC television, and finished shooting the documentary Crazy Wisdom in 2010.

In addition to his work as a cameraman he has produced, and directed a short documentary about the epidemic of homeless children in the US called Stand Up For Kids. He shot the DVD special features for MADMEN season 4 and 5, and finished shooting on When the Iron Bird Flies in 2012 and Began shooting on a feature documentary called Master Zhou in April 2013.

For more information about his podcasting, writing and public speaking please visit his site here.