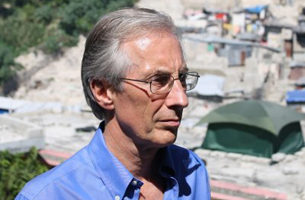 Listen in to this amazing interview with Nigel Fisher who has spent his life working in the Global South and on a variety of humanitarian interventions. He just received the Order of Canada and has plenty to say about hope and helping others, about how he’s a strong believer in stories and how we must enable children to think critically. He even talks briefly about his cameo in Sean Penn’s upcoming film called: The Last Face. Check out this article about him here.

Nigel Fisher O.Ont, M.S.C., LL.D., was appointed in July 2010 by United Nations Secretary-General Ban Ki-moon as his Deputy Special Representative for the United Nations Stabilization Mission in Haiti (MINUSTAH) at the rank of Assistant Secretary-General; he is also Resident Coordinator and Humanitarian Coordinator for the UN system agencies in Haiti. Mr. Fisher had just previously completed an assignment as Senior United Nations System Representative to the Post-Disaster Needs Assessment in Haiti following the tragic earthquake of 12 January 2010. Before returning to the United Nations, Nigel Fisher was President and CEO of UNICEF Canada.

Dr. Fisher has worked for three decades with the United Nations in a dozen countries, with UNICEF for over two decades in Asia, Africa, and the Middle East, with the Department of Peacekeeping – first in Afghanistan after the fall of the Taliban and currently in Haiti, and as Executive Director of the United Nations Office of Project Services, at the rank of Assistant Secretary-General.

His UN career has predominantly been in conflict- and crisis-affected countries: besides Afghanistan and Haiti, he was UNICEF’s special representative for Rwanda and the Great Lakes region of Central Africa, in the immediate aftermath of the Rwandan genocide. He led UNICEF’s response to the first Gulf War in the Middle East in the early 1990s, moving to northern Iraq after the Gulf War to re-start UNICEF operations there. He has also been UNICEF’s Director of Emergency Operations and Regional Director for South Asia.

In addition, he was Deputy Executive Secretary of the UN’s World Conference on Education for All and in 1998 acted as an adviser to Canada’s Foreign Minister on the issue of children and armed conflict in Canada’s foreign policy. He has published on issues of trauma recovery, children in armed conflict and basic education.

A Canadian national, he is married and has two daughters.