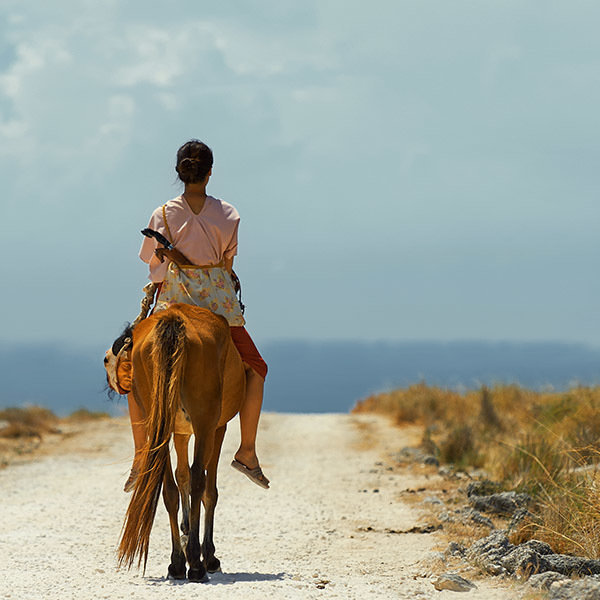 Mouly Surya and Face2Face host David Peck talk about her new film Marlina The Murderer in Four Acts, multiple possibilities, writing with images, violence, stillness and why women need to fight back.

Born in Jakarta in 1980, Mouly Surya is considered one of the most promising female filmmakers in Indonesia. Surya had a degree in media and literature before studying film in Australia. She directs her first feature film in 2008, FIKSI. The film opens at Busan IFF and wins numerous awards including Best Director at JIFFEST.

Her second feature WHAT THEY DON’T TALK ABOUT WHEN THEY TALK ABOUT LOVE (2013) screens at various film festivals including Sundance competition and Karlovy Vary. It receives The NETPAC Award at Rotterdam.

MARLINA THE MURDERER IN FOUR ACTS is Surya’s third film.

“Powerful, provocative, and visually stunning, Marlina the Murderer in Four Acts is a luminous new entry in the feminist western subgenre. Mouly Surya’s accomplished third feature is one of a kind: a contemporary reworking of the spaghetti western and smouldering revenge movie that is deeply rooted in the cultural and geopolitical landscapes of Indonesia.

Marlina (Marsha Timothy) is a young widow, living alone in a remote farmhouse with the embalmed corpse of her deceased husband. When robbers arrive, entitled by centuries of male domination, to steal her livestock, seize her possessions, and rape her, Marlina has only her courage and intelligence to rely on. She thinks fast and acts even faster. The next day finds her on the road, hitching a ride to town with a severed head in one hand and a sabre in the other. A tale of repossessed strength and personal identity, the film features a compelling protagonist and introduces a gallery of other splendid female characters, especially “10-months” pregnant Novi (Dea Panendra).

Surya builds tension with an assured mise en scène then dissipates it with bubbly bursts of caustic humour, playing with overused cinematic languages to find a genuine new style. Witty and subversive, Marlina the Murderer in Four Acts is a bold and welcome affront to the staid sensibilities of male-centred cinema culture.”

With thanks to Giovanna Fulvi