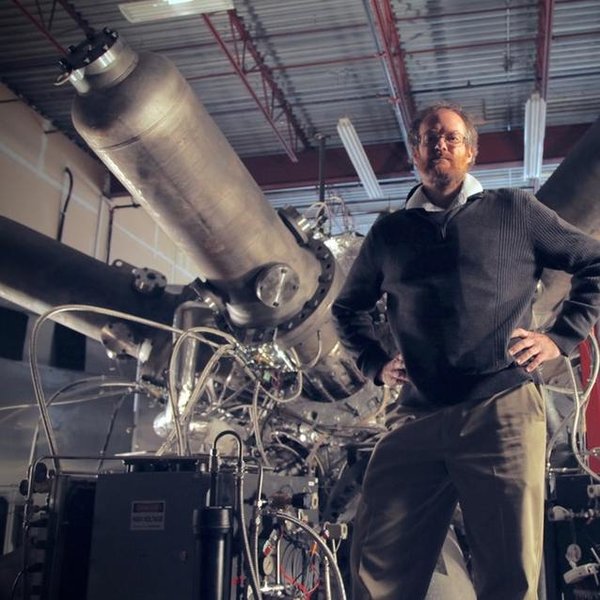 Mila and Face2Face host David Peck talk about his new film Let There Be Light, fusion energy, yeast excrement, plasma physics, Don Quixote and why science is about getting things wrong.

Mila Aung-Thwin is co-founder of EyeSteelFilm. After completing his studies at McGill University in 1998, he began working with maverick filmmaker Daniel Cross on the feature documentary S.P.I.T: Squeegee Punks in Traffic, learning the ins and outs of documentary filmmaking on the streets of Montreal with a squeegee punk named Roach. In order to take advantage of Canadian tax incentives, they founded a production company and called it “EyeSteelFilm” because it seemed like a good idea at the time.

After flirting with other titles such as “cinematographer” (Too Colourful for theLeague), “co-director” (Chairman George), “director” (Bone, Music for a Blue Train) and “Office Drywall Consultant” (various walls), he has decided to just go with “Producer”and stop worrying about it.

“A futuristic energy source that could indefinitely supply the world’s power requirements provides the backdrop for this absorbing documentary.” – The Hollywood Reporter

Clean, safe and unlimited power has been an obsession for scientists and inventors for centuries, and an underlying preoccupation for our society as a whole. Since the 1940s, when we first understood how the sun creates energy, nuclear fusion has been energy’s holy grail.

For decades, fusion has been delayed and thwarted by failure, miscalculation, fraud and politics. It has been maddeningly always just out of reach, which seems to make people obsess over it all the more. “Fusion is the energy of the future… and always will be,” goes one old joke.

But today, fusion is being pursued with a renewed zeal, mostly because we’ve never needed it like we do now, and there are 37 countries currently collaborating to build the biggest experiment ever, in order to prove that fusion is viable.
Will this finally succeed? Or will the project collapse under its own massive complexity? The film chronicles the work of the passionate scientists who are struggling to make it work.
“It’s rare to find people who work on projects that are designed to last decades, and these scientists would be happy if it worked in a century from now,” says co-director Aung-Thwin. “So on a personal level, this is a deep sacrifice – but they are doing it for the chance that it helps all of humanity.“