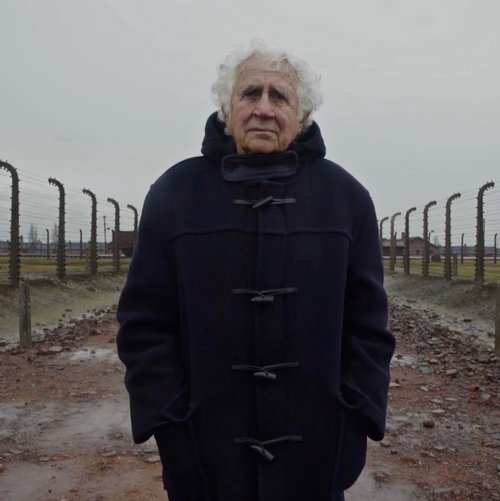 Matthew Shoycet, Ricki Gurwitz and David Peck talk about their new film The Accountant of Auschwitz, guilt, complicity, brainwashing and where one draws moral versus legal lines.

In the sleepy town of Luneberg, Germany, most days are quiet and uneventful. But one morning in September 2014, a 93 year-old man was charged with accessory to murder…of 300,000 people.

Seventy years earlier, Oskar Gröning was an accountant at Auschwitz, the infamous concentration camp where more than 1 million people were murdered by the Nazis. As men, women and children spilled out from overcrowded trains, Gröning’s job was to catalogue their valuables – belongings, he said, “they no longer needed”.

After the war, Germany had little interest in prosecuting its own and the vast majority of perpetrators went unpunished. With a shift in legal thinking, Germany is now using a wider net to go after SS guards, complicit cogs in Hitler’s killing machine. But by now, most have either died or are too sick to face prosecution. Oskar Gröning, however, is alive and healthy and deemed fit to stand trial.

The Accountant of Auschwitz is a compelling look at the race against time to prosecute the last living Nazi war criminals. The film features interviews with key players from the post-war trials and with Auschwitz survivors, sent to the camp as children, who testified at Gröning’s trial. As we witness this final chapter of the Nazi war trials, The Accountant of Auschwitz asks if it’s too little, too late or if it sends a powerful message to future generations. Is Oskar Gröning an accomplice to the biggest mass murder in history, or is Germany going after him to make up for the mistakes of its past?

Matthew Shoychet is a Toronto-based filmmaker.  He has worked in the narrative and documentary world of short films for many years.  As a co-founder of the production company Shoy Pictures, he has been able to explore various genres and projects in storytelling, advertising, charity work, and most recently Holocaust education. He is a graduate of York University’s Film Production BFA, as well as Sheridan College’s post-graduate in Advanced Television and Film.

In 2013, he worked with acclaimed Canadian director Bruce McDonald on the video instalments for the musical concert Tumbling Into Light,  by The Flying Bulgars.  Shorts directed by Matthew include, Red Ether, (2011), Faker Chaser, (2012), Patrick: Evil Awakens, (2014) and Anne Frank: 70 Years Later, (2015). His newest project, The Accountant of Auschwitz, is his feature film debut.

Ricki Gurwitz is a former producer at CTV News Channel. She started her career in New York, where she was a producer at WABC News Talk Radio. She moved back to Toronto in 2009 where she took over the production of the The Bill Carroll Show and The Jerry Agar Show on Newstalk 1010.

In 2011, Ricki made the switch to television, joining CTV News Channel as a segment and associate producer, working with reporters in the field to package news stories, and in the newsroom to cover the headlines of the day.

In 2015 Ricki left CTV to produce The Accountant of Auschwitz, her first feature documentary.