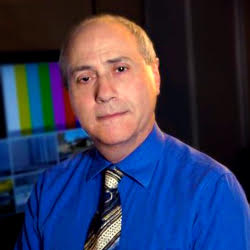 Listen in today as Mark talks about falling in love with journalism, how too often it’s a business and not a calling, what “getting it first” versus “getting it right” is all about and why he’s still hopeful.

Mark Bulgutch retired from CBC News in 2009 after a career that lasted more than 35 years. But he continued to produce every CBC TV News special event until 2012. In 2012 he wrote a weekly column on the web site of CBC’s chief correspondent, Peter Mansbridge.

He graduated from Carleton University in 1974 with an honours degree in journalism. He was immediately hired by CBC News as a reporter in his hometown, Montreal. He became a line-up editor there, before moving to Toronto to work as a writer on The National. He soon became the program’s line-up editor, a position he held for 11 years.

He became the senior producer of CBC News Specials, and then the Senior Executive Producer of CBC TV News and CBC NewsWorld (now CBC News Network). He was responsible for all live news programming on both networks. He has produced every federal election night for CBC from 1997 to 2011, and was part of every CBC election night program in every province and territory from 1995 to 2011. He produced the federal election debates for all networks in 2006, 2008, and 2011. He was a writer for CTV at the Olympic Games in London in 2012, and for CBC at the Olympic Winter Games in Sochi in 2014.

Among the many news specials he produced are: The 1995 Quebec Referendum, the funeral of Pierre Trudeau, the Sept 11 attack on the United States, the 50th and 60th anniversaries of D Day and VE Day, the memorial of four RCMP officers killed in Alberta, the war in Iraq, and the National Remembrance Day ceremony from Ottawa between 1995 and 2012. He has also been the executive producer for the host broadcast feed to the world of several events including World Youth Day and the Pope’s visit to Canada in 2002, and the XVI International AIDS conference in 2006.

His work has been recognized with 31 Gemini Award nominations, 14 Gemini Awards, 4 RTNDA Awards, the Canadian Journalism Foundation Award of Excellence, and the Canadian Association of Broadcasters Gold Ribbon Award. In addition he was honoured with the Gabriel Award from the Catholic Academy for Communication Arts Professionals for a documentary on the 60th anniversary of the liberation of Auschwitz.

He has also had a long career as a journalism educator.

He has been teaching at Ryerson University since 1987. He taught at Concordia University from 1979-1982.  And he taught at Sheridan College in 2009.

He often lectures for the Department of National Defence at both the Defence Public Affairs Learning Centre, and the Canadian Forces College.

He also serves as an adjudicator for the Canadian Broadcast Standards Council.

His book, That’s Why I’m a Journalist (Douglas & McIntyre, 2015), tells the stories of 44 reporters and their most remarkable days on the job.