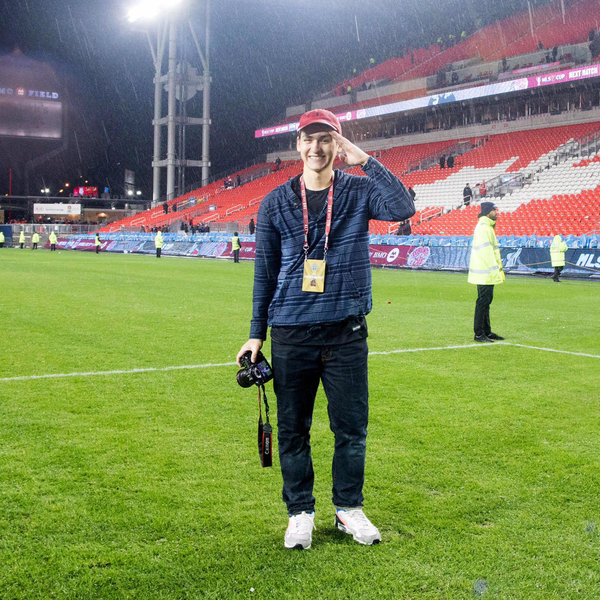 Eastern chronicles the dynamic story of four basketball players from Eastern Commerce Collegiate Institute in Toronto, supported by a community of fans, coaches, and mentors. A prolific basketball team known to foster future NBA players, the documentary poignantly captures the moments leading up to Eastern Commerce’s last championship before the high school’s closure in 2015.

Biography
LUKE GALATI is a triple threat — a journalist, specialising in writing, documentary filmmaking and photography.

Luke is fascinated with the world of visual storytelling. He is the director of the award-winning documentary, Eastern, which chronicles the final season of the Eastern Commerce Saints, Canada’s most historic high school basketball program.

As well, Luke appears as a regular guest on Raptors Open Gym: Fast Break, analysing and talking about the NBA and Toronto Raptors. The show is filmed at the Air Canada Centre and broadcast on Bell Fibe TV.

Luke is also an accredited season photographer, covering Toronto FC from pitch-side as a staff photographer with the SB Nation Blog, Waking the Red.

He was the first ever recipient of the Moriyama Research Student position, funded by the renowned architect, Raymond Moriyama at the Japanese-Canadian newspaper, Nikkei Voice.

For his work as a reporter at Nikkei Voice, Luke was recognised as one of three finalists for the 2015 Ontario Newspaper Awards’ Student Journalist of the Year.

During his time at Ryerson University, Luke was the recipient of the Del Bell Memorial Scholarship for excellence in featuring writing and the Seymour Schulich Undergraduate Award in Financial Journalism.

Last but not least, Luke is dedicated to coaching youth basketball in East York with a boys team, which he has done for the past four years.

Luke is currently finishing his undergraduate degree at Ryerson University’s School of Journalism. He is now working on his next documentary project and lives in Toronto’s east-end.