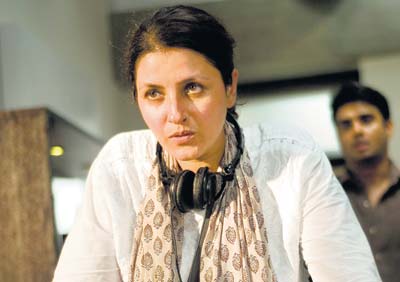 Today’s interview was a delight for me as I spoke with Leena and her three main actors from the film Parched. We talk about popular culture, shame, fear, gender disparity, and how we should question everything. You really don’t want to miss this one.

In a rural Indian village, four ordinary women begin to throw off the traditions that hold them in servitude, in this inspirational drama from director Leena Yadav.

This year has seen a cultural shift that puts more women at the active centre of Indian films. At the vanguard of this trend stands Parched, in which director Leena Yadav turns her lens on a group of ordinary women who, like the desert lands they inhabit, thirst for more than what life has given them.

“Society has rules for a reason,” says a village elder at the opening of this modern melodrama. And the rural community — home to widowed Rani (Tannishtha Chatterjee, most recently seen at the Festival in Siddharth), her vivacious best friend Lajjo (Radhika Apte), and the erotic dancer Bijli (Surveen Chawla) — lives and dies by those rules the old man cites. But when it falls to Rani to find a teenage bride for her entitled fifteen-year-old son, she and her friends begin to subtly question this status quo that favours men, sends child brides to abusive husbands, and ostracizes women for being educated and opinionated.

With a bold visual confidence, Yadav combines the stark realism of Rajasthan’s hostile desert landscapes with a Bollywood palette, vibrant tones that celebrate the unleashing of the women’s repressed sensuality and dreams. Splendidly shot by Academy Award-winning cinematographer Russell Carpenter (Titanic), Parched gradually accrues a feeling of grandeur — mirroring the way in which Yadav elevates these women’s stories, transforming her characters’ struggles into a stirring portrayal of liberation.

Leena Yadov was born in Mhow, India. She began her career as an editor on commercials and an assistant director for television. She made her directorial debut with Shabd, followed by Teen Patti and Parched.