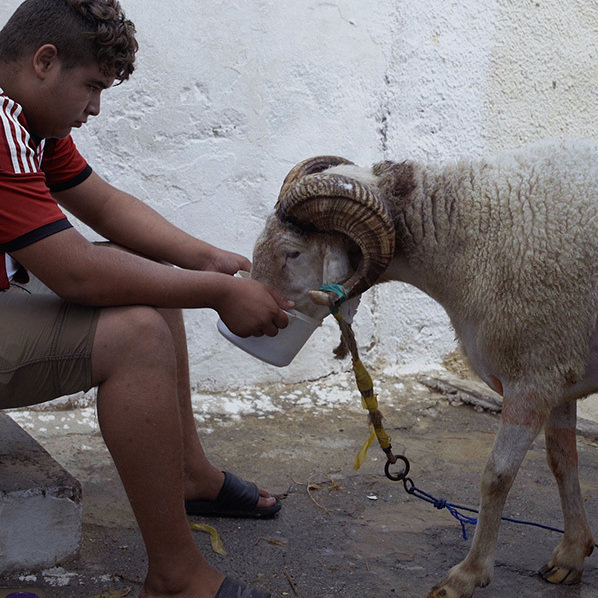 Karim Sayad was born in Lausanne, Switzerland and completed a master’s degree in international relations at Geneva’s Graduate Institute of International and Development Studies. He has directed the short film Babor Casanova.

Of Sheep and Men is his debut feature documentary.

“Sixteen-year-old Habib dreams of training his prized sheep to become a fighting champion and middle-aged Samir just wants to sell enough sheep before Eid to make ends meet, in this emotive profile of two men in an impoverished Algerian community.

It’s a tale of two men, one country, and many sheep. Habib is 16 years old, working as a bus conductor although he had once dreamed of becoming a veterinarian. He is the proud owner of El Bouq, a ram he hopes to raise to become a champion fighter. Samir is 42 years old, having seen enough hardship to know the cost of dreaming is high and that everything in life has the potential to bring a profit. He capitalizes on this ethos at Eid al-Adha (Feast of the Sacrifice) by buying and selling sheep for the coming slaughter. When El Bouq proves to be a far-from-illustrious combatant, and with Eid fast approaching, it looks as though the animal’s fate might not be a favourable one.

Building on the style and themes explored in his award-winning short Babor Casanova, Karim Sayad explores in his documentary feature debut the current climate in Algeria following the Arab Spring with an allegorical and intricate eye. Shot in the Bab el Oued neighbourhood of Algiers, with a camera that sinks seamlessly into each scenario, the film captures Habib’s, Samir’s, and even the sheep’s perspectives with an intriguing sense of intimacy that’s rich with symbolism.”

With thanks to Kiva Reardon – TIFF