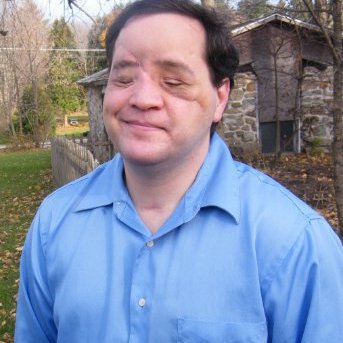 Jonathan and I talk about “blindness” and disability, assistive technology, crowd funding and why he roots for the underdog.

My name is Jonathan Nadeau and I’m a husband, a father of three, and a blind GNU/Linux user. I’m also the host of three podcasts about free software. I interview project leaders of free software and GNU/Linux distributions. This summer I’m interning with the FSF’s campaigns team.

I was not born blind but was in a car accident when I was 14, which caused me to lose my sight — after my accident I was introduced to a world of accessible technology using proprietary and nonfree software. I came to free software from using Windows and used a program called Jaws — this software allows people who are blind or have low vision to access a computer and be productive, by reading text and actions on the screen.

Jaws is nonfree software — users can’t share it due to the terms of the license and as a result many people who would benefit from it, are unable to get a copy. In the United States, around 80% of vision impaired people are unemployed, and often people who need this software can request a copy from their local government, but this usually comes with many frustrating requirements, such as being a current student or requiring the software for a job. And of course, giving up important freedoms as a computer user.

Around 1999, I had a recording studio in my house and my business partner was telling me about GNU/Linux and the philosophy behind it. I also heard that some distributions came with a screen reader called speakup out of the box, and so if I could get the system installed, I’d have a screen reader right out of the box with no third-party software. I tried to install it, but failed miserably.

I tried several times to use free software over the years, with limited success until 2007, when I heard that distributions were now using a new screen reader, called Orca — I picked one of the popular distributions of the day, downloaded and installed it on my computer — I was surprised to find that everything just worked. Granted, at this time, the Orca screen reader was not as good as the proprietary software I was used to, but I didn’t care — I was willing to put up with the lack of performance for the freedom it gave me.

Once I started using a free screen reader with a free operating system, I had freedom in my own computing, and realized the importance of free software for accessibility — it is important for people who depend on accessible software to understand the freedoms that come with using free software, and no longer be stuck in a world of relying on nonfree accessibility software.

So I’m now an advocate of promoting the use of free software in accessibility and want to help educate other people who depend on assistive technology and explain to them the freedoms they deserve.

One of my goals at the Free Software Foundation this summer is to start work on a completely free and fully accessible distribution of GNU/Linux based on Trisquel, which I’m using for my work at the Foundation.

A completely blind person will be able to install this software without assistance, and once they they put the CD into their computer it will boot into a live session, the Orca screen reader will start talking right away, and then they can start the install process. Once installed, the screen reader will be already running when you first log in. The majority of programs installed by default will have good accessibility and there will also be screen magnification features by default for low vision users.

This would be just the start of this accessible distribution. I want people to understand the power and flexibility of free software and not depend on proprietary companies to provide accessible software. This will result in giving the power and freedom to the people who depend on accessibility to ask for feature requests and make bug reports.

By working together as a community, we can make a big difference in the lives of people who rely on assistive technologies.