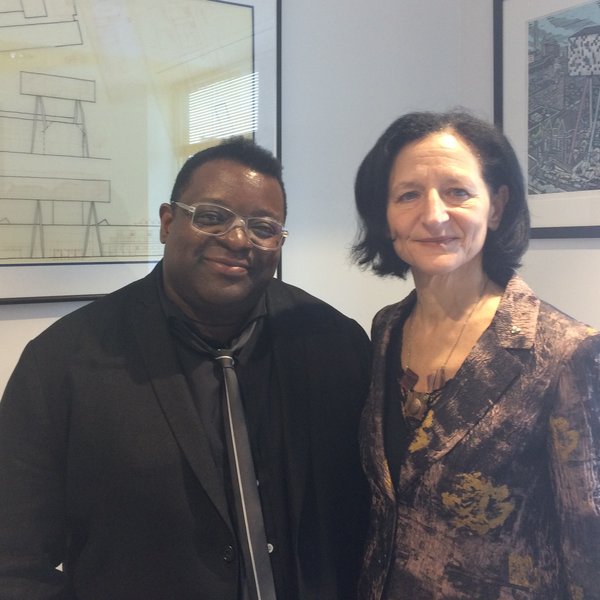 OCAD University (OCAD U) is launching a trailblazing international initiative, bent on elevating Canada’s prominence in the global communities of art and culture. The Jack Weinbaum Family Foundation Global Experience Project (GEP) will bring four leading international artists to Toronto for a significant residency at OCAD U over the next five years. The GEP will connect selected students with the visiting artists and notable scholars, on campus and abroad.

“We are thrilled beyond words to realize the launch of the Jack Weinbaum Family Foundation Global Experience Project,” said Dr. Sara Diamond, President and Vice-Chancellor, OCAD University. “The opportunity to interact closely with ground-breaking international artists will shape the learning experience for OCAD U students in a way that no classroom ever could, and heighten international awareness of Toronto as a vibrant contemporary art community.”

For GEP’s inaugural year, OCAD U is hosting the renowned Isaac Julien as its artist-in-residence. A London-based filmmaker and video installation artist, Julien is working with five students who have access to the behind-the-scenes installation of his current show at the Royal Ontario Museum (Isaac Julien: Other Destinies, now on until April 23, 2017) and will participate in events involving the artist and his work, including the upcoming Images Festival, which will screen Who Killed Colin Roach? andTerritories.

As part of his residency, which extends until the end of March, Julien will engage with students and the arts community through lectures, screenings and discussions. In May, GEP students will travel to London, England to spend time with Julien in his studio and learn about his process. The students will continue to develop their own projects with Julien’s feedback and critical perspective on their work, while immersed in London’s arts community.

Isaac Julien is a Turner prize nominated artist, photographer and filmmaker. He was born in London in 1960, where he currently lives and works.

Julien participated in the 56th Biennale di Venezia and worked closely with its curator Okwui Enwezor (2015). He has exhibited his work in major museums and institutions across the world including “Ten Thousand Waves” at Museum of Modern Art, New York (2013-2014), which is currently exhibited at Fondation Louis Vuitton in Paris (2016). In 2015, Julien had a retrospective at the Depont Museum (Tilburg, the Netherlands). In 2016, he showed “Playtime” and “Kapital” at El Museo Universitario Arte Contemporáneo in Mexico City and recently had a solo photographic exhibition titled “Vintage” (Jessica Silverman Gallery, San Francisco) displaying his photographic oeuvre from the 1980’s and his seminal “Looking for Langston” series, which is also included in “Made You Look”, at The Photographers’ Gallery.

Julien’s work is included in the collections of institutions around the globe. In 2013 MoMA published RIOT, a monographic survey of his career to date, featuring his films, photographic and installation works over the period.

Julien is currently producing a new work that is a poetic meditation on aspects of the life and architecture of Lina Bo Bardi. The first chapter of this work, “Stones Against Diamonds”, was shown during 2015’s La Biennale di Venezia, Art Basel and Art Basel Miami Beach. Amongst forthcoming exhibitions, “Western Union: Small Boats” will be part of “Protest” exhibition at Victoria Miro Gallery (fall 2016).

Dr. Sara Diamond is the President of OCAD University, Canada’s university of the imagination. She holds a PhD in Computing, Information Technology and Engineering from the University of East London, a Master’s in Digital Media theory from the University of the Arts London and an Honour’s Bachelor of Arts in History and Communications from Simon Fraser University. She is an appointee of the Order of Ontario and the Royal Canadian Society of Artists, and a recipient of the Queen’s Diamond Jubilee Medal and the Digital Pioneer Award from the GRAND Networks of Centres of Excellence. She is also a Senior Fellow at Massey College, University of Toronto. In 2014, Toronto Life described her as one of “Toronto’s 50 Most Influential People.”

While retaining OCAD University’s traditional strengths in art and design, Diamond has guided the university in becoming a leader in digital media, design research and curriculum through the Digital Futures Initiative, new research in inclusive design, health and design, and sustainable technologies and design. She also played a leading role in OCAD University’s establishment of the unique Indigenous Visual Culture program. These initiatives have built strong partnerships for OCAD University with science, business and communities in Ontario and abroad. Currently, Diamond serves on the boards of Baycrest, ORION (Ontario’s high-speed network), Women in Communications and Technology; and i-Canada; and is Chair of the Scotiabank Nuit Blanche Toronto Advisory Committee. She has served the larger university community through: her membership on the Standing Advisory Committee on University Research (SACUR); as a current member of the Standing Advisory Committee on International Relations (SACIR) of Universities Canada; as Chair of the Standing Committee on Relationships with other Postsecondary Institutions for the Council of Ontario Universities (COU); and as a member of the Council of Ontario Universities executive. She was also a member of the 2011-2012 Council of the Canadian Academies’ expert panel on the State of Science & Technology in Canada.

Diamond founded the Banff New media Institute in 1995-2005. Diamond is a data visualization, wearable technology and mobile media researcher, artist, designer and scientist. She is founding Chair of the Mobile Experience Innovation Centre (2007-2014) and was co-Chair of Mobile HCI (ACM) in 2014. She is co-principal investigator in the Centre for Innovation in Information Visualization and Data-Driven Design, an OCAD U/York University initiative, and theme leader on the ORF-E funded iCity project as well as a member of the BRAIN alliance. She holds funding from the Social Science and Humanities Research Council and the National Sciences and Engineering Research Council.

Diamond continues to write and lecture on the subjects of digital media history and practice, visual analytics, mobility and design strategy for peer-reviewed journals, and acts as a reviewer and evaluator for IEEE and ACM conferences and journals; SSHRC, CFI and the Canada Research Chair programs. Her artwork is held by prestigious collections such as the Museum of Modern Art, NYC and the National Gallery of Canada.