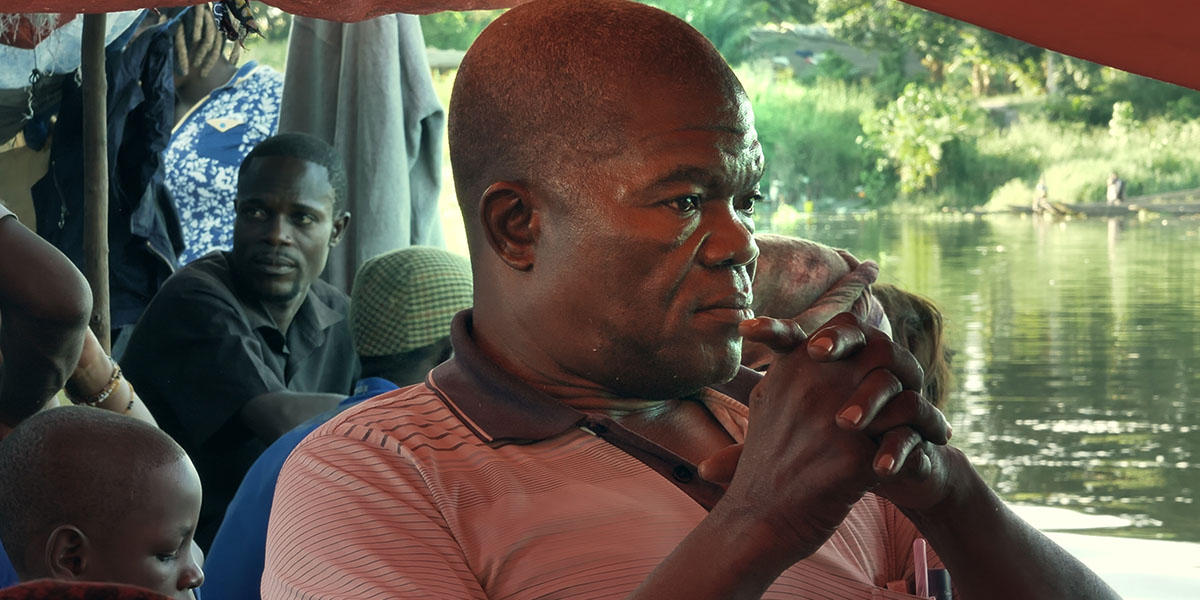 Dieudo Hamadi and Face2Face host David Peck talk about his new film Downstream from Kinshasa, resilience over resistance, responsibility and reality, politics and the human condition and a desire for life and a better tomorrow

Dieudo Hamadi returns with his latest portrait of his native Congo, honouring survivors of his country’s Six-Day War in 2000. Since making his feature documentary debut in 2013, Dieudo Hamadi has produced an unparalleled body of work that captures glimpses of contemporary Congolese life.

In examining elections (Atalaku, 2013), schools (National Diploma, which played TIFF in 2014), violence against women and children (Mama Colonel, 2017), and political mobilization (Kinshasa Makambo, 2018), Hamadi has told individual stories that speak to collective experiences and histories. With Downstream to Kinshasa, Hamadi perfects this approach as he follows a group of victims of his country’s Six-Day War in 2000, who are seeking reparations from the government.

In June 2000, Kisangani became a battleground. In this northeastern city on the Congo River, Rwandan and Ugandan forces clashed in a conflict that was part of the bloody Second Congo War. Though a devastating conflict — so much so that it’s sometimes called the African World War — 20 years later survivors are still fighting for compensation and recognition of the atrocities they endured in this siege.

Here, Hamadi’s focus isn’t on past geopolitics but rather on the present and very personal: a group of Kisanganians who were maimed by the heavy shelling and gunfire. Through musical theatre, the victims have reclaimed their voices. But having never had official acknowledgement or financial compensation for their pain, they decide to journey down the Congo River to the capital in a bid to finally make their stories heard.

(With thanks to TIFF)

Dieudo Hamadi was born in Kisangani (Democratic Republic of the Congo) in 1984 and studied Medicine in 2005-2008. He then attended several documentary workshops. Dieudo is author of two short documentaries Ladies in Waiting and Zero Tolerance that caught the attention of several festivals in Europe and Toronto. Ladies in Waiting received the ”Pierre and Yolande Perrault” scholarship at Cinema du Réel in 2009.

In 2013, with Atalaku, his first feature documentary he won the Jory Ivens Award in the Festival du Réel in Paris, the best Foreign film Prize at the San Diego Film Festival and the Jury Prize in Fidadoc. In 2014, National Diploma received the International Prize of the SCAM and the Potemkine Prize at the Festival du Réel. The film is shown at the TIFF in Toronto and travels to 60 festivals around the world.

In 2017, Mama Colonelle is presented at the Berlinale and wins two awards – Best Film, Tagesspiegel Prize, Forum Section. After that it wins the Grand Prix at Cinema du Réel in Paris. The movie keeps on traveling in many festivals and an award for best documentary – AMAA 2017.

In 2015, Dieudo created Kiripifilms, his own production company. In 2019 Dieudo Hamadi has been attributed the McMillan-Stewart Fellowship in Distinguished Filmmaking by the Film Study Center of Harvard University.