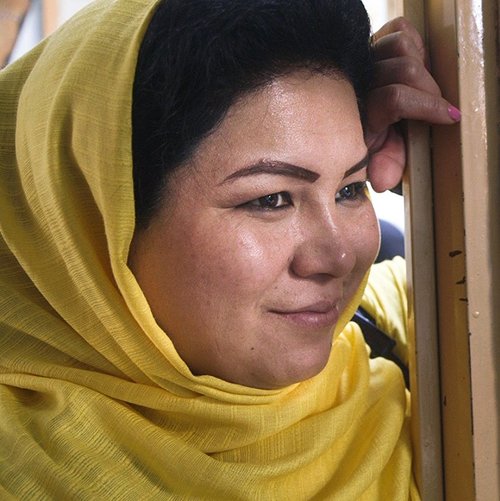 Elizabeth Mirzaei and David Peck talk about her new film Laila At The Bridge, opium production in Afghanistan, freedom and oppression, bravery, corruption and persistence, corruption, systemic misogyny and the love of a Mother.

In a country offering almost no treatment services despite a crisis of addiction, Laila Haidari took the highly unusual decision to found her own pioneering addiction treatment center and a restaurant where all of the waiters are recovering heroin addicts. Her brother Hakim, a solidly recovered addict, runs her free treatment center, which offers services for both men and women. As a former child bride she has known hardship in her 40 years. And she revisits that misery regularly as she mingles with drug-addicts, huddled under a Kabul bridge.

She encounters corpses. And she meets the near-dead, malnourished and sick who she tries to convince to accompany her to Mother Camp. “When I listen to their pain, I forget my own,” says Laila, who has struggled to provide sanctuary for heroin addicts in the world’s largest opium-producing country. Since she began her work, Laila has treated more than 2,000 people at her free center and has paid a high personal price for these successes. Her three children still live in Iran, where she grew up as a refugee during Afghanistan’s Taliban rule. She has been separated from them for 10 years.

Due to the danger inherent in her work at the center, Laila cannot bring her children to join her in Afghanistan. As foreign troops withdraw from Afghanistan and international aid dries up, Laila struggles to prevail over a crisis of addiction and a corrupt government in a country on the verge of collapse.

Laila at the Bridge is a deeply personal perspective on the global addiction epidemic in Afghanistan. The film follows the labor of love of one woman fighting to keep her center alive in the face of physical threats, governmental opposition and the departure of the international community from Afghanistan.

Elizabeth Mirzaei, Director and DP, was previously a teacher for blind students, the editor of a newspaper on a Russian island, and the manager of an expat bar in Kabul.

In 2011, she and her husband Gulistan Mirzaei began co-directing short documentaries for Al Jazeera’s award winning Witness strand. Elizabeth was a director and cinematographer on the BBC’s THE KILLING OF FARKHUNDA, which was nominated for a Royal Television Society Award, and a cinematographer on the Emmy-nominated WHAT TOMORROW BRINGS.

Her short films have also been shown before world leaders at the Oslo Conference on Women’s Rights and she worked with the Tiziano Project to teach filmmaking to students in a Kabul high school. She lives in Los Angeles with her husband and daughter.