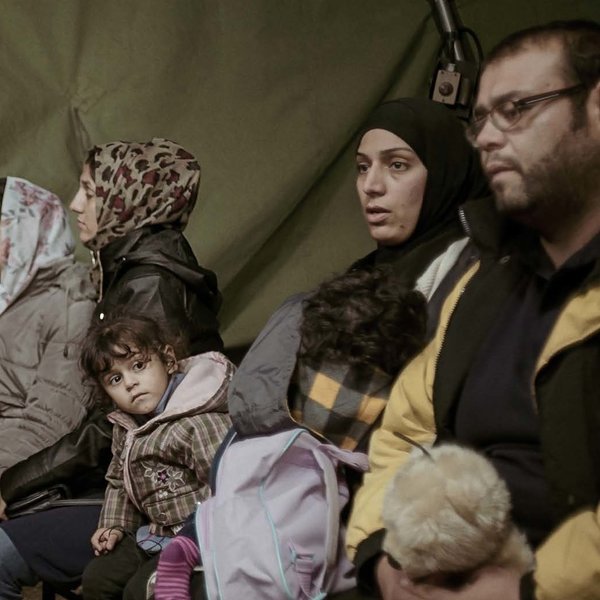 Egil Larsen and Face2Face host David Peck talk about his new film 69 Minutes of 86 Days, The Refugee crisis, making sense of time, polarization of real issues, childlike wonder and why he still has hope.

Every day, about 90 Syrian refugees arrive in Canada.

The war in Syria has now lasted six years.

According to UNICEF, one in three of today’s Syrian children have never experienced anything but war and flight. Every week hundreds of families flee. 69 Minutes of 86 Days is the part of the story that hasn’t been told. Follow three-year-old Lean’s journey from an unfamiliar port in Greece on the edge of a beach, through passport controls, congested trains, tents, and a large field, to the quiet streets of Uppsala, Sweden.

At an unspecified port, we are led into a crowd of people through a trail of discarded lifejackets. Part of a new wave of documentaries that depict the various elements of the Syrian crisis, 69 Minutes of 86 Days takes a poignantly humanistic approach. In its quiet beauty, it unravels the physical and emotional challenges that refugee families face every day: millions of people on the run, thousands who have lost their lives and a patchwork of political power games. With this serving as the entry point to the story, the camera moves onward. Walking along a Greek highway, a little girl stands out from the crowd. Three-year-old Lean is brimming with curiosity and childlike energy. Her playful nature engages us, in stark contrast to the intimidating backdrop of Europe. Without any background information on the child and her family, one can only guess where they’ve travelled from; we naturally assume they have crossed the ocean and already seen many things. While Lean may not fully understand what she’s experiencing, her strength and optimism shine through, giving hope to those who need it the most.

Filmed from one metre above the ground, the camera captures the story from the viewpoint of the child. We are with her and her little “Frozen” backpack amongst the legs and bags belonging to the adults around her. We realize that she understands the seriousness of the journey and is on her way to a new future, but through the journey she holds onto her childlike ability to normalize her days. She sings, plays, shares a lollipop with her little sister, washes the face of her uncle and sleeps in the arms of her parents when she gets tired. The landscape changes continuously as national borders are crossed. Lean is on her way to her grandfather in Sweden and she dreams of learning to swim.

Egil Håskjold Larsen has worked as a cinematographer and director since finishing his studies in 2008. Studying fine art photography in Turkey, and finally documentary filmmaking in Norway. In 2016 he released his first documentary film Ad Astra. 69 Minutes of 86 Days is his first feature length documentary film