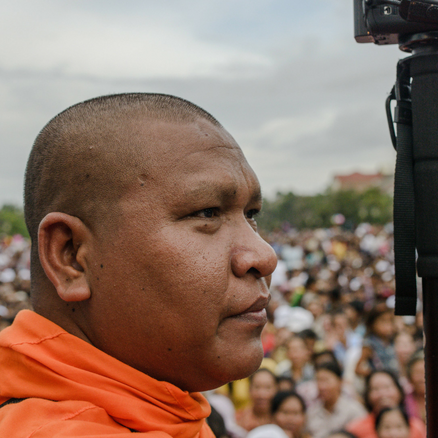 Fading from black, the frame fills with the image of a rice field, leaves of grass billow in the wind. Cut to construction along the Mekong river in the capital Phnom Penh. On the soundtrack the metronome of steel girders being pushed deep into the ground keeps time. In the foreground a young man prepares to cast his fishing net into the river as an old sampan fishing boat chugs by.

In the background a new bridge is under construction, the sound of which marks the unsteady pace of progress in Cambodia. The film is an intimate portrait of three Cambodian’s involved in forced evictions. We meet the characters at the very beginning of their journey, unsure of themselves and unaware of where they will end up after years of protests against their government.

Chris is an award-winning video journalist and documentary filmmaker and the founder of Little Ease Films. He has spent the last nine years making his first feature documentary ‘A Cambodian Spring’.

He is a regular contributor to the Guardian newspaper and in 2014 produced an award-winning undercover investigation into slavery in the Thai fishing industry.

His work has taken him as far afield as South Sudan, Burma, the Philippines, Laos and Thailand.

He is currently developing an animated feature film about slavery in the Thai fishing industry, a feature documentary about a young Irish man who went to fight Assad in Syria and a Virtual Reality computer game about slavery and migration.