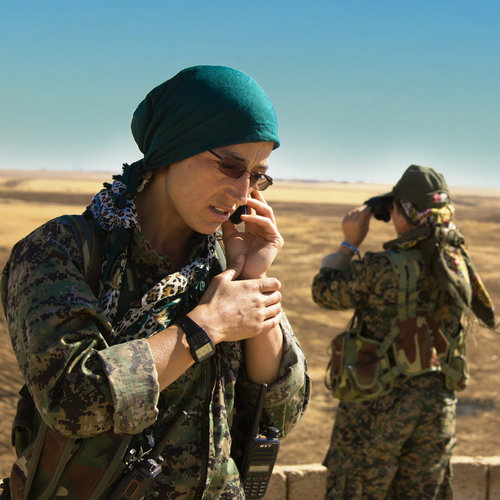 Filmmaker Alba Sotorra embeds with this group of Kurdish resistance fighters gaining unprecedented access to the Commander and her troops, when Commander Arian is hit by 5 bullets, Sotorra helps nurse her back from the brink of death.

On the front line of the Syrian war, 30-year-old Commander Arian guides a female battalion towards the city of Kobane to release its people from the grip of ISIS in Alba Sotorra’s empowering tale of emancipation and freedom. When the war in Syria broke, a group of women from the Kurdish resistance assembled the YPJ—Women’s Protection Unit. Arian, who witnessed at a young age the nefarious treatment of sexual assault victims, leads the unit and dedicates her life to battling ISIS.

As the YPJ inches closer to their target, she implores her comrades to discover the true meaning of their fight: freedom for the next generation of women.

With unquestioned access to the commander and her troops, including delicate scenes of her recovering from multiple bullet wounds, Sotorra brilliantly crafts an enthralling portrait of a woman on a mission.

EAVE graduate Alba Sotorra has produced feature documentaries and fiction films from cinema and television since 2005. She graduated from cinema school in Madrid (UCM 2003) and has an MA on Cultural Studies (2008). She participated in SOURCES2 (2010), Berlinale Talent Campus (2011), Dokincubator (2014), IDFA Academy (2015) and EAVE Producers Workshop (2017).

She is founder and director of the company Alba Sotorra.

For more information about his podcasting, writing and public speaking please visit his site here.