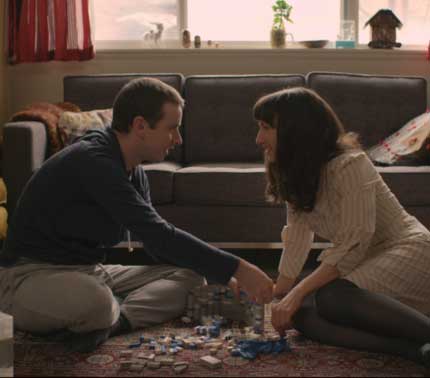 Adam, Sarah and Face2Face host David Peck talk about paradox, their new film Great Great Great, why love and relationships are never linear, why nothing lasts forever and what might lie below the surface.

Adam has written and directed a series of award-winning films that toured the international film circuit from Toronto to L.A., Sydney, Berlin and Beijing. Not content to work only in film, Adam has also distinguished himself as a television writer. He wrote scripts for the series “Cashing In” and “Mohawk Girls” He also had a hand in creating the upcoming series, The North End with Big Soul Productions.

Sarah is an actor and producer from Toronto, Canada. She plays Lauren in the feature film Great Great Great, which she produced and co-wrote with her long-time collaborator, Adam Garnet Jones. She also produced and acted in the short film, LIAR, which premiered at the prestigious 2012 South by Southwest Film Festival in Austin, TX. Other producing credits include the short films A Small Thing (TIFF ’08) and Cloudbreaker (TIFF ’06). Sarah is also the Chair of the Breakthroughs Film Festival, the only festival in Canada dedicated to showcasing short films by emerging female directors. She received a BFA in Film Studies from Ryerson University, and is one half of the sketch comedy duo Ex-Adults.

Great Great Great is a dark comedy about the uncertainty in long-term relationships. In the span of Lauren and Tom’s five-year relationship, they’ve never had a fight. Their sex life is fine. They get along fine. Everything points to marriage, until Lauren suddenly sees a lifetime of “just fine” yawning ahead of her, and it immediately makes her hungry for a better, fuller future. She just has to decide what “better” really means.

One moment Lauren resolves to double down on her commitment to Tom, and the next moment she is ready to blow the whole thing up. So, Lauren does what any reasonable person would do – she does not choose. She does both. In a doomed attempt to have everything she wants without giving anything up, Lauren simultaneously starts an affair with her boss, rents a bachelor apartment, and asks Tom to marry her. When they start to plan the wedding, and her no-strings affair gets complicated, Lauren struggles to save what is most important to her before she loses it all.

Great Great Great is a deeply relatable portrait of a woman who makes us squirm with discomfort while asking us to love some of the most unlovable parts of ourselves.